Huobi Token (HT/USD) rose another 25% on Wednesday, capping a solid weekly 58% gain. The surge happens amid positive developments for the crypto exchange.

Well, Huobi is trying to redeem itself after a challenging time in the cryptocurrency market. Peers such as Voyager and Celsius have been facing liquidity challenges. That sent panic that other crypto exchanges like Huobi could follow suit. Consequently, the Huobi native token crashed to trade at below $4 earlier this month. That is ten times less than its May 2021 high of almost $40.

As of press time, the Huobi token traded at $6.4 as enthusiasm returned. CoinJournal had reported that About Capital was injecting funds in the crypto exchange. In a press release on October 8, Huobi said its founder Leon Li Lin will sell his stake in the exchange to About Capital. The Hong-Kong based asset manager is expected to inject “sufficient” capital to fund the exchange’s global expansion.

On October 9 again, Huobi announced a new Global Advisory Board. The board consists of leading blockchain and non-blockchain business leaders. These include Tron founder Justin Sun, one among those speculated to be eyeing the purchase of the crypto exchange. The board will spearhead Huobi’s global expansion.

Below, the Huobi token is making parabolic moves following positive developments. However, the token has met resistance at $6.8. 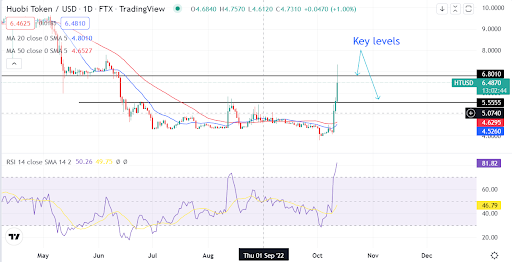 On the daily chart, the Huobi token is retreating from an overbought resistance at $6.8. With the positive sentiment, the token could break the resistance barrier. However, due to oversold conditions, we urge buying lower after a correction. The potential support lies at $5.55. Alternatively, the token could correct to the 20-day or 50-day MA.

Huobi token could continue to claim higher levels due to positive developments. However, the current valuation of the cryptocurrency is too high for an outright buy. Investors should consider buying lower.

Portrait of Famed Fashion Designer Virgil Abloh by Pop Culture Artist Rob Prior and its 1:1 NFT sold for $1 Million at Art Basel Miami