December started positively for the native token of Chainlink (LINK/USD). The cryptocurrency added an intraday of 2.45%, taking the weekly gains to 14%. The gains are fueled by a positive update by Chainlink on December 1.

According to the announcement, Chainlink Staking v0.1 will launch on the Ethereum mainnet on December 6. This is an important development as staking has been touted as a game changer under Chainlink 2.0 Economics. The staking feature was at least expected this December. However, Chainlink made an update regarding the lock-up period. Rather than the 12-24-month lock-up period, the team settled for a lower 9-12 months. Why is it important?

Lock-up is crucial for a staking service. It is the main mechanism for maintaining stable collateral for blockchain networks. However, prolonged lock-up can attract backlash from users unable to withdraw their assets. The latest update is important to Chainlink users looking to earn rewards by staking their tokens on the platform.

Chainlink recovery back to $8 ahead of staking launch 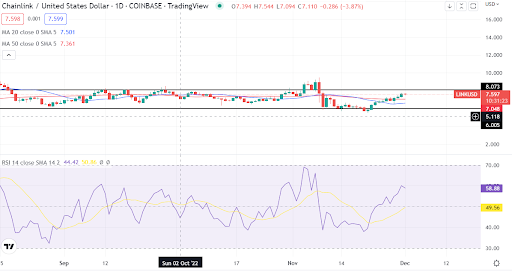 LINK has initiated recovery along a short-term ascending trendline on the daily chart outlook. At $7.6, LINK trades slightly below a crucial resistance at $8.

LINK moved above the 20-day and 50-day MA. The area between $6 and $8 has seen flattening moving averages, indicating it is the zone where buyers and sellers match up. However, buyers are in control in the short term, as indicated by a recovery above the moving average. The RSI has also moved above the neutral zone, in line with the buyer’s strength.

The resistance at $8 will remain crucial for LINK investors. A breakout would usher in further recoveries. The prospects of the upcoming staking feature on Chainlink will be crucial for a potential breakout.

On the flip side, the short-term rally may be cut short if bears take control of LINK price at $8. That would force a correction to the moving averages or $6 support.

Where to buy LINK

eToro offers a wide range of cryptos, such as Bitcoin, XRP and others, alongside crypto/fiat and crypto/crypto pairs. eToro users can connect with, learn from, and copy or get copied by other users.

Bitstamp is a fully regulated company which offers users an intuitive interface, a high degree of security for your digital assets, excellent customer support and multiple withdrawal methods.

Cosmoverse Conference 2021 kicks off in Lisbon