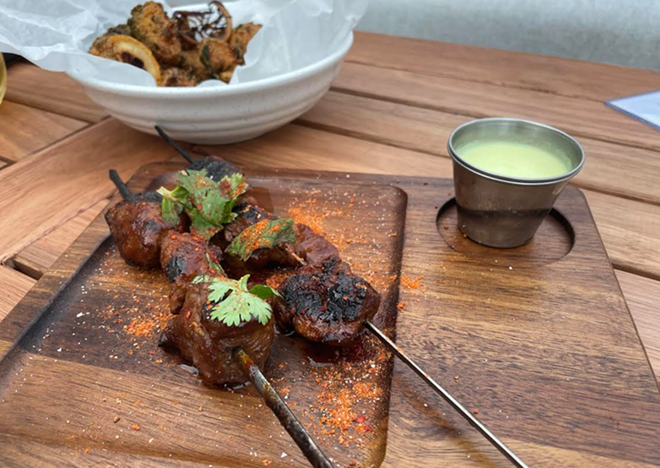 On a recent Thursday evening it felt as though Shaker Heights was the epicenter of Northeast Ohio. Every square inch of Van Aken District was activated, from the fully occupied front patios of restaurants like Michael’s Genuine and Kindred Spirit to the grassy knoll, where children scampered over top like ants at a picnic. Tuttle Road, a former through-way, had been converted to green space, more than tripling the existing patio space just outside the Market Hall, which itself was a beehive of activity.

If the Van Sweringen brothers could see their sleepy suburban bedroom community now.

Despite what has proven to be an unassailable track record with respect to food-and-beverage tenant selection at Van Aken, with a failure or turnover rate approaching nil, there has been one high-profile closure. Sawyer’s, chef Jonathon Sawyer’s last remaining Cleveland eatery, closed at the outset of the pandemic and never reopened. The space was quickly assumed by Forward, the Cleveland-based hospitality group that already operated the rooftop bar above, Garden City.

For Forward CEO Michael Schwartz and team, it was an opportunity to redesign the property from scratch, addressing issues with respect to both design and menu. The goal was to make the restaurant more broadly appealing by serving food that was flavorful but conservative. While that might be a win for casual shoppers, it’s a loss for diners who still hope to be pleasantly surprised by a chef’s creations.

We strolled up and grabbed seats on the patio, a comfortable mix of tables and soft seating overlooking the central park. The view seemed to improve not just outward, but inward as well thanks to a major renovation of the dining room that eliminated the clunky dining platform in the middle of the space. Now, from our seats outdoors, we could see clear into the open kitchen.

A quick glance at the chart-style menu reveals an emphasis on small plates and sharable dishes – “snacky” foods, for lack of a better word. Only four large plates are presented, but there’s no reason those cannot be passed around the table as well. As Alex Trebek would say, “The categories are” — dips and spreads, vegetables, fish and seafood, kebabs and mains. Many items take advantage of the live-fire cooking equipment that Sawyer left behind, including the kebabs and large plates.

The meal started on a high note, with a zippy “orange” wine ($10) from California and a captivating gin-based cocktail ($10) fortified with black tea. Our opening salvo consisted of a summery salad ($11) with perfectly textured lentils, diced vegetables, nuts and celery leaves in a light, bright dressing. We dragged wedges of plush pita through a mound of creamy hummus topped with wheels of crisp chiles and a sprinkle of warm Middle Eastern spices.

Round two revealed a kink in the armor. If I were to guess, our lamb kebabs came off the grill while our fish was still swimming in hot oil. The result was smoking-hot fried fish but tepid meat. Temperature issue aside, the lamb ($13) was well charred, tender and paired with a frothy coconut and curry scented yogurt sauce. Better yet were the uber-crunchy and assertively seasoned whitefish nuggets ($14) that managed to taste even better when dunked in the silky lemon-spiked aioli. These dishes might be considered “small plates,” but they are by no means small. Other skewers star shrimp, chicken and tofu.

The creativity seems to dip as the plates increase in size. Choices are of the salmon, meat-and-potato and pasta variety. There’s an expertly grilled and sliced hangar steak ($26) paired with roasted spuds, both of which come showered with heaps of smoky paprika. A pungent preserved-mushroom sauce is on the side for a dip. I’m not at all sure what happened with the grilled chicken thigh and polenta dish ($22). The polenta wasn’t so much creamy as it was soupy, submerged beneath a half-inch of olive-flavored broth. We focused on the wood-fire grilled boneless thighs instead.

Before or after dinner, diners can make a detour to Garden City. As it happens, the swanky rooftop bar and lounge opened after Sawyer’s had closed, so the two components never had an opportunity to coexist. Now, they enjoy a symbiotic relationship. Guests who snag seats on the highly coveted terrace enjoy elevated views of the entire Van Aken District. To go with that view is a menu of signature cocktails and a truncated selection of small plates from downstairs. Even from this lofty vantage point, it’s nearly impossible to recall the dated shopping plazas and convoluted intersections that Van Aken District replaced. And isn’t that the point?

Sergio García, Leading the Players Championship, Still Has Covid on His Mind