Surging crypto rallies and the coronavirus scare — the two phenomena seem to be closely related, according to many. But this particular correlation is not necessarily translating to causation, at least according to some experts.

Mati Greenspan, the founder of Quantum Economics, offered his insights regarding the apparent connections between the two events. “So far, I don’t see any direct correlation between the coronavirus and crypto prices.” Instead, Greenspan pointed to the current altcoin rally as an indicator of a growing appetite for higher-risk investments:

“In my estimation at the moment, we’re in an alt season and that generally tells us that people are looking to take risk if they have a bit of extra cash. This is exactly what’s happening in the stock markets as well. It’s most likely that whatever is driving crypto at the moment is a ‘risk-on’ sentiment and not flight to safety.”

While some consider the coronavirus scare as a possible catalyst for a store-of-value narrative, Greenspan dismissed the notion: “I don’t think anybody inside of China, for example, would be going ‘OK, people are dying here, let me go buy Bitcoin.’”

BTC network is stronger than ever

Stories of Chinese crypto mining facilities being shuttered appear to have had little impact on Bitcoin (BTC) network hash rates. The network is chugging along stronger than ever with hash rates continuing to compete, surpassing all-time highs, according to Blockchain.com.

If such shutdowns were of any significant scale, a network slowdown would be one of the clearest indicators of such a relationship, especially considering the high percentage of mining pools that are centered in China. As of now, it is estimated that somewhere between 65% and 70% of all BTC mining pools are concentrated in China, according to CoinShares Research.

By observing mining pool activity on Coindance, one can see that the usual mining pools are up and running with little indication of weakness. A number of the world’s most prominent mining pools are based in China, including Poolin, F2Pool, BTC.com, Antpool and ViaBTC. They appear to be performing as usual. 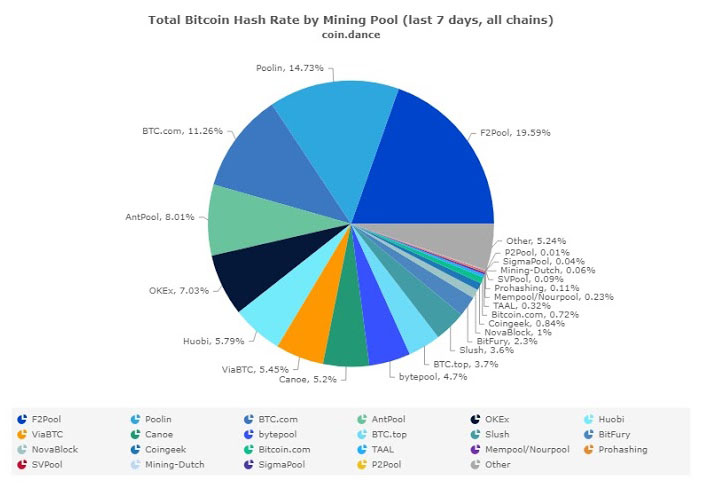 In an attempt to find further details regarding the mining situation in China, Cointelegraph reached out to Bitmain, whose spokesperson explained that the health scare had not affected the mining industry much, if at all. However, Bitmain declined to comment further on the situation.

Other narratives are at play

Greenspan explained that other narratives are playing a much greater role in current conditions: “As far as narratives go, the halving is huge. That’s one of the main drivers of the market.” Bitcoin’s mining block reward is set to be reduced by half in May, resulting in increased scarcity, causing a theoretical increase in the market price of the asset.

Additionally, increased instability in the Middle East might have sparked the current crypto rally, beginning in January. “The whole thing was set off… with the U.S. missile drone strike in Iraq… For the first time in [its] short history, we saw Bitcoin reacting to a major geopolitical event as a safe haven. That gave Bitcoin a lot of legitimacy.”

Greenspan then dove into details surrounding what he feels is the strongest cause of the rapid rise in high-risk asset investment: central bank monetary policy.

“The more we see action from the central banks, the more we see cash injections from the Federal Reserve, the European Central Bank and the People’s Bank of China. They’re just pushing money into the system and that money has to find a home.”

Regarding the potential for hyperinflation, Greenspan pointed to recent economic fiascos of Venezuela and Zimbabwe, adding that at some point, the phenomenon will most likely have to kick in, but not everywhere:

“That isn’t happening in the major economies like the United States, Japan and China at the moment… Even economists don’t really understand why there isn’t any significant inflation after all the money that’s been pumped in there. It’s the biggest economic puzzle of our generation.”

But what if it gets worse? Like… much worse?

When asked to consider the hypothetical possibility that the coronavirus might indeed cause a global turn for the worse, Greenspan turned his attention instead to the very real possibilities approaching in the near future, saying: “The real concern here is the fact that mainland China is on a self-imposed lockdown.” The streets of Shanghai, he explained, are pretty much empty. This may potentially have significant implications for the global supply chain of durable goods, adding:

“Even Tesla, for all their stocks zooming and zooming and zooming, they have a huge giga factory in China, which is shut at the moment. It’s not even operating. I don’t know how they’re going to make their production quotas with their factory offline.”

The analyst expects Q1 quarterly earnings to be disappointing. “The stocks aren’t really reacting. There’s this feeling — a feeling that’s been beaten into the market over the last few years — that no matter what happens, the central banks are going to come in and will be able to pave over any production caps with free money injected into the markets.”

At some point, this money-pumping phenomenon may reach a crucial turning point, and the coronavirus shutdown could be the kicker that gets the ball rolling downhill. Even if a cure is discovered tomorrow, it’ll make China look like it’s been standing still for around a month. Greenspan believes this will have repercussions:

“It’s like the butterfly effect, where a butterfly flapping its wings in Chicago could cause a typhoon in Tokyo. We have an entire country — the largest country in the world is offline at the moment. Everything will be affected by this.”

In regards to the effect of such economic woes might exert on crypto markets, Greenspan was non-committal: “How it will affect Bitcoin’s price, I really couldn’t tell you. At the moment, I don’t feel like it is, but in the future, it could.”

A preview of IMVU’s VCOIN