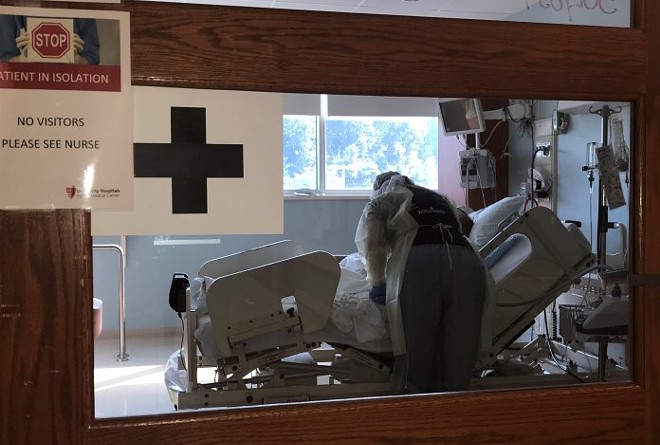 Dr. Bruce Vanderhoof, the medical director for the Ohio health department, yesterday said that the reality of the pandemic right now is that there are two Ohios.

The Delta variant of #COVID19 is spreading rapidly across Ohio. ODH Medical Director Dr. Bruce Vanderhoff explains why vaccination is the best defense against this new variant. pic.twitter.com/APUY4nfhXe

As of the end of last week, only 48% of Ohioans had received at lease one shot of a Covid-19 vaccine, and vaccination rates vary widely by county, with Delaware leading the pack at 62% vaxed and Holmes County coming in dead last at 15%. Despite the vax-a-million push, those numbers haven’t climbed much as shots have been made available to anyone over the age of 12 who wants one. (Only 2,986 vaccines were administered in the entire state on Tuesday, according to state.)

This, according to the Washington Post, means that Ohio won’t hit the 70% vaccinated mark until the spring of next year, which means pockets of susceptible, unvaccinated people that could drive regional outbreaks if not during the summer, likely in the fall and winter, Dr. Vanderhoof said.

The highly contagious Delta variant hasn’t yet caused the spikes in infections and deaths seen in other states, but it has become far more prevalent in Ohio, accounting for 1% of cases from the start of the pandemic through the middle of this summer but 15% of cases from June 6 to 19, the state said.

And with the spread, Vanderhoof said in a call this morning with reporters, the question is not whether an unvaccinated person with get Covid but when.

Vanderhoff says he expected the Delta variant would be responsible for an increase in COVID cases. He says people who have not received the vaccine are likely going to get COVID. He says it’s a matter of when not if.

As data paints a stark and grim picture of the outcomes for those who’ve gotten the jab and those who haven’t — unvaccinated people account for 99% of recent deaths and 97% of hospitalizations — the push is on, through public health campaigns, novel ideas like lotteries and new outreach by some Republican lawmakers who had previously dismissed science in favor of turning the vaccine into a culture war front, to convince those who’ve held out against the proven, safe vaccines to get their shots.

“This is becoming a pandemic of the unvaccinated,” CDC Director Rochelle Walensky said last week.

Your Steak Is More Expensive, but Cattle Ranchers Are Missing Out